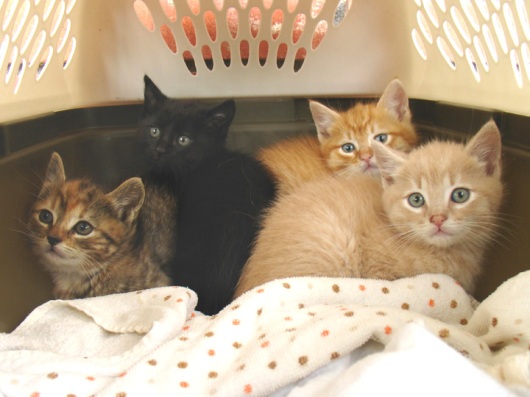 Four feral kittens head to Boulder for socialization and adoption.

Four feral kittens headed to dog-town Boulder a few years ago after Barb Nardone trapped them in Broomfield. They were lucky. She trapped them before they became too old to be socialized and adopted at the Boulder Humane Society. In doing so, she helped make a success story. And, it didn’t hurt any that the kittens were pretty, too.

Though Boulder has a reputation of being dog heaven, kittens like these four are adopted from the Humane Society. And just like in the surrounding communities, people likely abandon their cats, which is how feral cat populations begin. Basically, feral cats are cats that live outside all the time that someone discarded or were born to abandoned pets.

Spring is kitten season as is summer, so the time is right to talk about what we all can do in our neighborhoods to help out the feral cats. Without intervention, feral kittens are destined to struggle for food, water and shelter. It’s already a given they won’t receive immunizations and medical help. And, as trash containers become more secure, their food source, as bad as it is, decreases.

A better approach is for ordinary folks to catch, neuter and return older cats to their home areas with the commitment to provide them food, water and shelter. It’s the most humane way to treat feral cats. In the case of kittens 4 weeks to not much older than 6 weeks, the best plan is to catch them and take them to the Boulder Humane Society or other similar place. There they will be learn to trust humans and treat them as friends. It’s a much better approach than allowing the suffering in neighborhoods to go unassisted.